The old saying goes, you can do things, fast, good, and cheap. Choose two! The odd man out for most indie filmmakers is either “fast” or “good”. Let’s pretend you want a good film.

Films don’t look cheap because they were filmed with cheap equipment. They look cheap when you have a crew that doesn’t know what they’re doing, or is not putting in the time required for a quality film, or you’re not working within the constraints of what you have. Take your time to learn as much as you can beforehand, because the more planning, the better your film will look.

If your story is uninteresting, or dialogue seems unnatural, you started making a movie before you were ready. People expect a quality production to have a good story. Keep iterating over it, removing the unnecessary (especially anything that costs money), and improving what you have. How can you make your script better? Get endless opinions. People should consistently get excited after reading your script. This can be done for free, as long as you want. This phase gives you the best bang for your buck in terms of effort, so take as long as you need!

There are great actors that will work for free, and although it’s very awkward, many will show up to your home. If your film has acting that doesn’t seem natural, then you did not do a very good job with your auditions. Find good acting talent and your audience will forgive a lot!

Don’t choose locations you can’t handle. If you have 1000 watts of light, you’re not going to be able to light large rooms very brightly. You can accommodate this with your script. Have the action happen in rooms with big windows, where you can lean on natural light, or outside. You can use your light kit to handle the closeups pretty easily. Also choose locations that are not noisy, and are able to accommodate a more relaxed shoot schedule.

They won’t forgive bad sound though! This is the first thing you should invest money into. Get a good microphone, boom, and recorder, and someone who knows how to use them. If you can’t afford that, the typical way I see people avoid a lot of this expense is to use voice over narration instead, perhaps recorded in a quiet basement or bedroom. You can also go with the silent route, leaning on just music.

Take the time to get everything on your camera set how you want it. Get the focus right. White balance. Don’t change your shutter speed, aperture, or ISO just to make something brighter or darker. Try to get the lighting right instead. Use whatever hacks you can, opening and closing doors and windows, using whatever you have to block light. Keep your camera at its native ISO, or its minimum ISO if you’re shooting with a LOG gamma curve, or something that restricts it. Don’t rely on post-production. Don’t rely on color grading. Get it right in the camera. Post-production works best when you only need to finesse your footage.

Don’t just capture information with your shots. Look for balance, and for each shot to be done in a way that better tells your story.

If you don’t have a steadicam, gimbal, slider, or dolly, then most if not all of your shots should be on a tripod. Instead, lean on the blocking of characters and the pacing of your cuts to make your film more dynamic. However, you can use cheap strategies like using a wheelchair as a dolly, and it will turn out perfectly smooth. You can also stabilize things in post later and it can look great if the footage was reasonably stable.

Control what’s in your frame

Everything in the shot should be intentional. If you don’t have control over what’s in the background, reduce the aperture to blur it out, or go in tighter with your framing. The audience should not be unnecessarily distracted, and showing your actors better is sometimes a good thing.

Dress the set and coordinate colors

In addition to removing things that don’t belong in the set, you can scrounge, borrow, or shop around for things that can help the location. Color coordination goes a long way to impressing your audience. Choose a suitable color scheme for your film, then go through your actors’ clothes and see if you can find some that match. See what you can do with the set to make it suit your scheme more. You can also emphasize your colors during color grading.

Imply rather than show 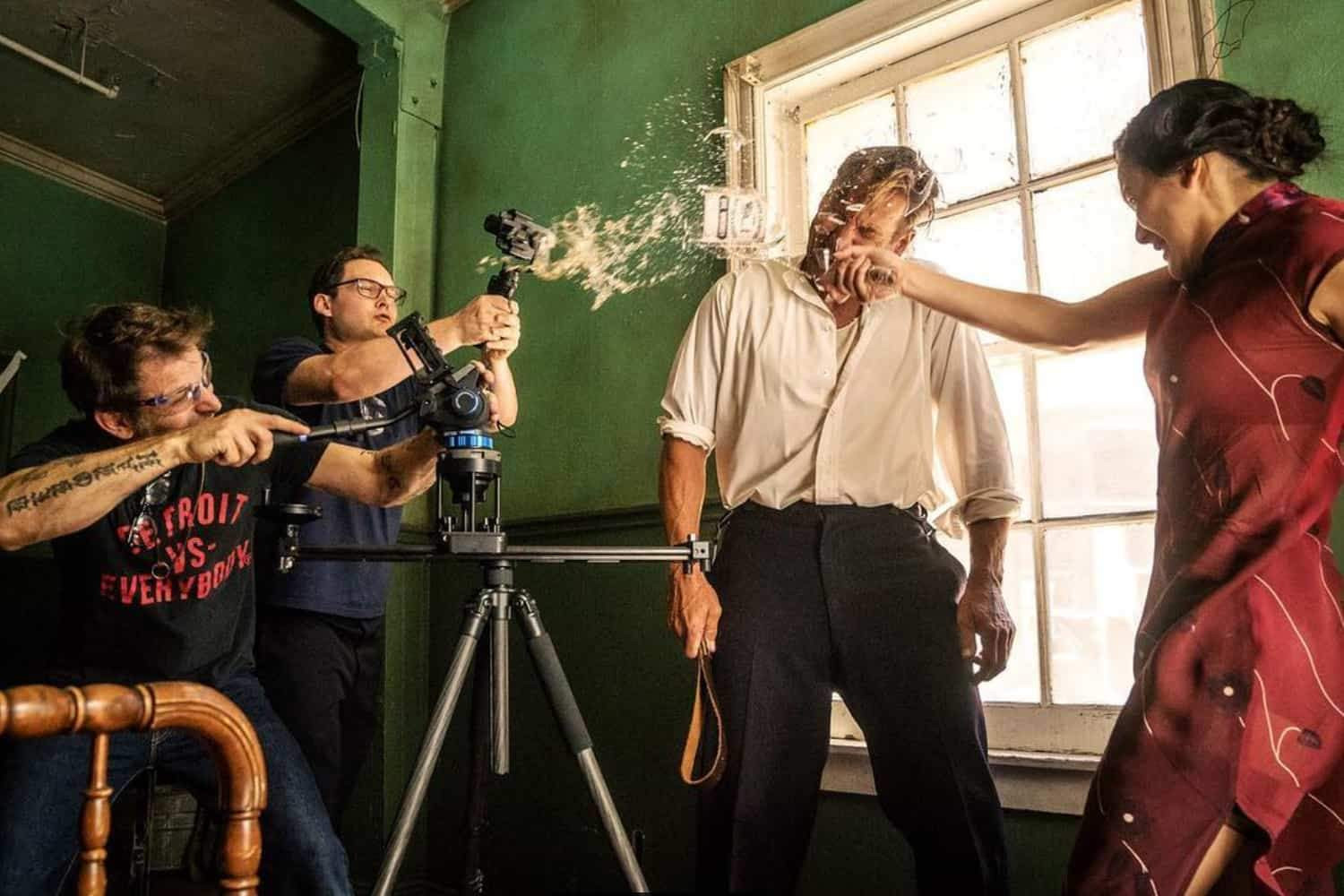 The worst thing you can do, if you’re on a budget, is to include a fight scene. Your fight scene will not look good unless you have trained professionals, or you’re being incredibly irresponsible and doing things for real. Even someone collapsing to the ground is not easy to film believably. Show the emotion leading up to the fight, and the aftermath, and let the audience imagine what must have happened. Use sound with reactions from people watching, instead of visuals of what they actually see.

Don’t do what you can’t do right

If you have an idea, you can try to do it, but if it doesn’t turn out completely okay, don’t include it. Always have a backup plan for when your experimenting fails. If your fake wound doesn’t look real, you might be able to not show it so prominently, so it looks real enough. Otherwise, maybe just show the blood trail and the feet.

Background actors are easy to get, and it’s okay if one or two of them don’t show up for whatever reason. However, having them helps fill in the world your characters live in, and makes it feel more familiar and easier to buy into. If you keep them around all day though, you have to feed them, so plan accordingly.

If you managed to produce quality footage, you shouldn’t need to do too much with anything. First, there’s the color grading. If you have a computer with a good video card, you can get Davinci Resolve for free. Lean on the waveform parade with reference stills to match up one shot to another. Make skin tones match, then the rest of it. If you want a particular look, be sure you don’t overdo it. If you try to push your footage too hard, it might look unnatural, and worse, you’ll start to introduce banding into your video, where you can see the shift from one shade of a color to another.

Go into After Effects, or Fusion, to remove things you don’t want, like lens/sensor dirt, a boom pole, and maybe a sign or logo. If the edge of frame shows something you don’t want, feel free to crop. Also, if you have an issue with noise, there are a couple of plugins available that do a great job cleaning it up. I can personally vouch for “Neat Video”.

Again, sound is something you can’t skimp on, and you probably won’t get right on your own. The problem is, you can’t rely on your computer speakers to tell you what your film will sound like at a film festival. You need someone with large monitor speakers who can adjust your levels for you. They can likely also clean up your sound, removing ambient noises that don’t help your story. They can also add in realistic sound effects to help sell your scenes. I collect free sound effects when I find them, but often what I have doesn’t quite fit. For a short film, I’ve seen prices range between $250 and $1000. I tried to let the video editor I hired do sound, but I actually did notice a significant problem when my film was first screened, so now I have someone I go to regularly. As mentioned before, you can decide to avoid using location sound entirely, if you want.

If you know how to present your film professionally, it garners more respect that way. Don’t appear like an amateur who managed to scrape together a film. When you talk about it, say what it’s about and be ready to say some things about the motivation behind the production, and what you focused on.

Generally, if there are problems with a film, it will look better on Vimeo or Youtube than it will in a theater. People won’t be able to discern as much detail, and the sound will be much more forgiving. Hell, a lot of people will watch it just on their phone. It’s another way to make your work look better.

While it’s hard to make a good looking film if you have little to no budget, the tools are likely within reach for cheap or free (except for sound stuff), so just be smart about it and go in with a plan, and you can make something that wows your audience for pocket change!

Any cookies that may not be particularly necessary for the website to function and is used specifically to collect user personal data via analytics, ads, other embedded contents are termed as non-necessary cookies. It is mandatory to procure user consent prior to running these cookies on your website.